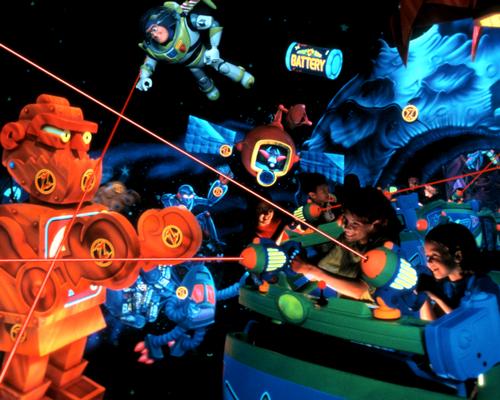 ANAHEIM , Calif. , May 5, 2004 ” Famed intergalactic hero Buzz Lightyear has been tapped to help Disneyland celebrate its golden anniversary with the addition of a new out-of-this-world attraction, “Buzz Lightyear Astro Blasters.”  The new attraction premieres in Tomorrowland in 2005 during the park”s 18-month-long worldwide “The Happiest Homecoming on Earth” 50th anniversary celebration that debuts on >May 5, 2005 .

The attraction is an interactive experience in which guests pilot their own Space Cruisers and twist, turn and fire personal laser cannons in order to hit targets and gain points that will protect the peace of outer space from the forces of the Emperor Zurg!  Total scores will appear in the Space Cruiser at the conclusion of each adventure.

“It will be especially popular with the video game generation,” said Barry Braverman, senior vice president of Walt Disney Imagineering.  “Players will jump back on the attraction again and again to improve their scores and top friends and family members.”

Imagineers will incorporate a brand new online component inviting at-home fans to join in the excitement.  Guests on the attraction will be virtually paired up with internet partners who will join the adventure at Disneyland in real time through web cam technology.  At-home participants will help increase the scores of guests on the attraction by raising the value of targets along the way.  This groundbreaking innovation, melding a Disney theme park attraction with real-time online interaction, will be a first for any Disney theme park.

“Buzz Lightyear Astro Blasters” will be located at the entrance to Tomorrowland, in the former site occupied by the CircleVision Theater, and will be a Disney FASTPASS attraction. Featuring a host of familiar faces, including those popular little green, three-eyed aliens, the black light adventure features a vibrant and colorful cosmic setting.