Critter Country has gone through several changes over the last few years.  This land used to be called Bear Country, but now the only bear influence is Winnie The Pooh signing autographs, because the Country Bears have been retired.  Splash Mountain is located in this part of the park and is a favorite ride. The Davy Crockett Canoes are great fun and provide a cool ride on a hot day. 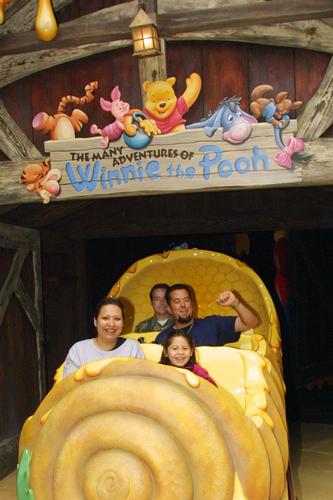 Located in Disneyland”s Critter Country near Splash Mountain, “The Many Adventures of Winnie the Pooh” begins outside, aptly beneath the trees. “Disney has recreated the Hundred-Acre Wood in a warm and cozy forest-like atmosphere.

Guests board “Hunny Beehives” to kick off the three-and-a-half-minute journey. Inspired by A.A. Milne”s classic children”s tales, the story begins on a Blustery Day with Pooh, Tigger, Eeyore, Piglet and all of their special friends.

Whirling winds summon a storm, making the Wood a Floody Place. “The special effects in the Floody Place are some of the most effective at Disneyland,” says Baxter one of the designers, who joined the company in 1965. “The Beehives actually bob as if they”re floating.”

Escaping the storm, Tigger and friends do what Tiggers do best ” bounce ” all the way to Pooh”s home. The excitement makes Pooh a very tired bear so he retires to an afternoon nap. Taunted in his dreams by a host of hunny-stealing Heffalumps and Woozles, Pooh eventually reaches the climax of his dream — Hunny Heaven — where he”s surrounded by gobs and gobs of his sweet treat. Surprise! Pooh awakens to find that all of his friends are on-hand for a hunny-filled birthday party for Pooh himself.

“Fall asleep and wake up to find out it”s your birthday ” life doesn”t get much better than that,” says Bruce Gordon, project director in creative development, Walt Disney Imagineering.

According to Gordon, the production team wanted to tell the story with limited narration, capitalizing on the classic music and spectacular images. Originally from various Winnie the Pooh featurettes and television specials, the music is composed entirely by the Sherman brothers. The renowned team was first recruited by Walt Disney in the early 1960s, composing music for a host of Disney classics including Mary Poppins, The Jungle Book and Chitty Chitty Bang Bang, as well as popular Disneyland attractions “It”s A Small World After All” and “The Enchanted Tiki Room.”

Designed by Art Director John Stone, each scene in the attraction features a series of props, figures and remarkable backdrops, creating a magical environment suitable for “The Many Adventures of Winnie the Pooh.” Each element was crafted and painted by more than 40 Disney artisans ” an endeavor that took 12 months to complete. “The attraction features some of the most beautiful scene painting I”ve ever seen,” says Gordon, 23-year veteran of The Walt Disney Company.

Fans of “The Many Adventures of Winnie the Pooh” can meet their favorite characters nearby at a colorful new photo location, partake in a sweet treat at Pooh”s Hunny Spot, or check out Pooh”s Corner Shop, inspired by Pooh and his friends.

Walt Disney talks about the start of Disneyland