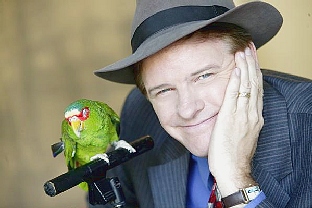 DisneyDreamer.com has been a fan of Dana Daniels for many years, so we thought it would be appropriate to have a page dedicated to Dana. Disney fans would probably have been introduced to Dana’s unique style of performing during his shows at the Golden Horseshoe.

The Golden Horseshoe can be found in Frontierland Disneyland Park Ca.

The first time I saw Dana a group of us had wandered in to the Golden Horseshoe Disneyland. My friend and I laughed so hard we almost fell off of those little cheesy chairs you sit in on the main floor.  I am very picky on comedy I usually don�t buy right into the act but I was defiantly and instant fan that day. Later on I was in charge of running an event in our hometown and we hired Dana through Outreach Comedy to come do the show. It was a major success and our town still talks about it.

Nothing ever stays the same at Disneyland, and on Wednesday, October 8, 2003, The Golden Horseshoe Variety Show performed its final show at 5:30 pm after 4000+ performances. Guests at the final performance included Dana Daniels’ wife, Jane and two children, many fellow cast members, his former piano player, Richard Allen, original sound technician, Bobby Davis, dozens of magicians and co-workers, friends and fans as well as special guest, Wally Boag, star of the original Golden Horseshoe Revue for over 27 years and Dana Daniels’ mentor.

Here is a history of the shows over the years:

Billy Hill and the Hillbillies

This show featured the comedy and magic talents of Dana Daniels. It ran from June 13, 1995 until October 8, 2003 ~ It starred Dana Daniels, Richard Allen, Hal Ratliff and many others over the years.

Woody’s Round-up This child friendly show ran from November 21, 1999 until July 17, 2000 and featured characters from the Disney/Pixar movie “Toy Story”.

Frontierland: The Little Town That Could This comedy/melodrama ran occasionally from 2001 until 2003 and featured my supposed history of the founding of Frontierland. It starred players from Laughing Stock and Company; including John Eaden, Kevin Gregg, Ken Parks, Danny Roque and Cory Rouse.

Dana Daniels is well known as a comedian magician who performs an act with a psychic parrot. Born and raised in Long Beach, California, Daniels has been called one the funniest comedy magic acts working today. In-fact, he was the very first magician to receive the Comedy Magician of the year award from the world famous Magic Castle in Hollywood, California.

Corporations such as McDonalds and Lincoln Financial both have had her perform all over the country for their top sales people, management and store owners. Dana keeps the laughs going at a speedy clip using his trusty side kick Luigi the psychic parrot. Yes, you read correctly — a psychic parrot! In-between Dana’s outrageously funny sight gags and poking fun at magicians, he sets out to prove that his little green friend is truly clairvoyant.

Together, they perform such miracles as finding chosen cards, reading the mind of somebody on a cell phone and turning a member of the audiences $100 bill into bird food only to have it reappear inside an egg laid by Luigi. (Tough trick for a male bird.)

Dana’s many television appearances include Evening at the Improv, CBS Morning Program, Masters of Illusions, Lance Burton’s Taking it to the Streets. She has also opened for such stars as Jan & Dean, Charo, Amy Grant & Vince Gill. 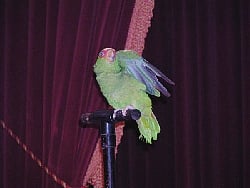 The Orange County Register wrote an article April 8th 2008 called: The secret life of magic’s most famous parrot It is definitely worth the read. 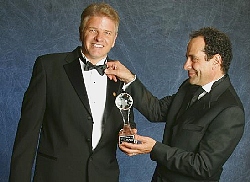 Check out Dana Daniels on MySpace you can find a ton of really cool pictures.

We DO Talk About Bruno!