The Mob and the Mouse – By Randy Ferris

In my last article we examined the relationship between Walt Disney and Charlie Chaplin and in this installment we will look at the brief, but interesting connection between Walt and the post-Capone Chicago mob.

Scarface Al Capone was in the federal slammer for income tax evasion, prohibition had been repealed and Chicago’s’s new crime boss Frank The Enforcer Nitti was looking for a new source of income. They had their traditional rackets, gambling and prostitution, but neither was the cash cow that illegal booze had been. 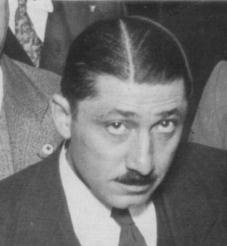 They found their new niche in union manipulation and eventually determined to specialize in the entertainment unions. The reason was simple; the country was still in the depth of the Great Depression but the one commercial stream that kept rolling without interruption was the movie industry. Going to the movies was still popular as it was vastly inexpensive when compared to night clubbing or going to a live performance. The movie industry was still only about 18 years old and nave to the scheming and muscle of the mobsters.

The Chicago mobs entrance into entertainment rackets had a grass roots beginning. After supplying illegal booze during prohibition to the clubs where live performances were held they had a long list of contacts and many of those contacts owed the mob a favor. It didnt take long for them to muscle their way into the bartenders union, the restaurant workers union, and the musicians union, etc. This was easy but there were only so many clubs and restaurants that were surviving, no less prospering, during the depression. Then, they stumbled into the movie business and, as Nitti would soon find out, bit off more than he could chew.

Tom Maloy, the president of the Motion Picture Machine Operators Union became indebted to the mob when he asked Nitti to use his influence within the prosecutors office to get his indictment on income tax fraud thrown out. This gave the mob the opening they needed to take over the projectionists union which provided them with two income streams; their traditional skim from the union dues as well as large payoffs from the theatre owners to avert any labor actions which might shut down their theatres. Nitti double crossed Maloy realizing that Maloys conviction and incarceration would give him sole control of the MPMOU.This was easy money but still chicken feed and Nitti, ever the racketeering entrepreneur, realized that the big money was in L.A.

Nitti backed George Browne for the presidency of the International Association of Theatre Stage Employees (IATSE) and control of this union set Nitti up for his big break into Hollywood. Nitti set up George Browne and Willie The Squealer Bioff to be his emissaries in Hollywood. Bioff and Browne had a long history as

Their Hollywood scheme was the same that they had used in Chicago with the Motion Picture Machine Operators and the theatre owners. The mob skimmed money from the IATSE union dues and ordered strikes of the stage crafts that would essentially shut studio production down. Willie Bioff manipulated the strikes and George Brown rode in as the white knight to accept studio payoffs as a labor mediator who got the strikers off the picket lines and back to work. Many studio chiefs felt that the payoff to George Browne was cheaper than suffering a prolonged strike and liked the idea that the payoffs were a one-time expense as opposed to the ongoing costs of giving in to the increased wages and benefits that the union members were demanding. Deserved or not Bioff and Browne soon gained a reputation as effective labor mediators and there is some evidence that union members did gain wage and benefit increases during George Brownes presidency.

In 1941 everyone at Disney was settled in at their new studio in Burbank, but things were not well in the house of mouse. The studio was heavily in debt. The outbreak of war in Europe and Asia meant a huge loss of receipts from the foreign distribution of Disney cartoons and features. There were loans to pay off for the new studio, losses on Pinocchio and Fantasia and pressure from Bank of America, the studios primary financier, to cut costs and control expenses as Walt was increasing salaries, much to the dismay of brother Roy.

The studio swelled from 300 to 1200 employees and Walt no longer had the daily interaction with the staff the way that he did at the smaller studio on Hyperion Avenue. Employees that labored over the animation features resented the fact that they did not get screen credit, some employees felt that there was a caste system entrenched at the studio and everyone wanted a raise.

While things were turbulent at the studio, unions began organizing those working in the animation field for the first time. Artists struck and successfully organized at the Max Fleischer Studios (home of Popeye) in New York during 1937 and the Screen Cartoonists Guild targeted the animators at MGM (home of Tom and Jerry) and won recognition without a fight. The Guild then turned its sights on Warner Brothers (home of Bugs Bunny and the Looney Tunes). The head of animation, Leon Schlesinger scoffed at the notion of union organizing and a strike ensued. Schlesinger, a seemingly humorless man who was both despised and made fun of by his animators (legend has it that his lisp was the inspiration for Mel Blancs voices of Daffy Duck and Sylvester the Cat) eventually made a deal with the union and then pressed them to go after Disney of whom he was very jealous often claiming that Disney got preferential treatment at the Academy Awards.

The Disney’s desperately wanted to fend off the Guild’s attempts at organization; like most studio heads Walt considered unions to have a communist influence.

The studio countered by trying to form a company union with grievance and bargaining rights called the Cartoonists Federation.
Walt also made two lengthy speeches telling the employees about the studios financial woes and reminding them that they were higher paid than the employees at MGM and Warner Brothers. He hoped that their loyalty to him and his vision would stave off the Guilds organizing efforts but things did not go his way.

In May of 1941 the National Labor Relations Board (NRLB) ruled that the Cartoonists Federation was an illegal company union and ordered it to be disbanded. His speeches had little impact on those employees who were leaning toward the Guild and many of them eagerly signed up. In an attempt to get rid of the bad seeds Walt fired 20 animators, all members of the Cartoonist Guild and on May 28th at 6:00 AM the picket lines went up in front of the studio.

(In the picket lines shown below it is interesting to note that the studio seems to sit alone with a few
residences to the north of them. Anyone who has be to or by the studio today can contrast that with the vast expansion of residences, office buildings hospitals in the area.)

Whether Walt called them or they called Walt is unclear but on June 30th the Disney brothers met with Willie Bioff and agreed to have him broker a deal to end the strike. Bioff called the Guilds lieutenants to his San Fernando Ranch and offered to let them join his much larger IATSE union telling them they could go back to work the next day with significant pay raises. However the Guild rejected the offer and the strike continued until September when the Bank of America pressured the Disneys to meet with Federal Mediators and enter into binding arbitration which ended the strike.

Employees got raises between 10 and 100% but unfortunately about half of them eventually got laid off due to the expense control measures needed to pay for the lucrative contract. Even though the strike was over, tensions remained strong at the studio. Those newer and younger employees who struck resented the non-strikers and the older, longer termed non-strikers held the strikers responsible for killing the spirit of the studio. But as we all know Walt overcame this setback just as he had overcome so many in the past. He continued to make innovative, quality animated and live action pictures and invented the concept of the Theme Park.

The fortunes of Frank Nitti, Willie Bioff and George Browne would not be the same. Prior to their meeting with Disney they had tried to muscle in on the Screen Actors Guild causing SAG President Robert Montgomery to hire a former FBI agent to investigate the IATSE and its leadership. The former Fed exposed their Chicago backgrounds, mob ties and uncovered checks from Joseph Schenck, head of 20th Century Fox, to George Browne which led back to Nitti. The private investigation had been turned over to Federal Law Enforcement which explains why Bioff, Browne and the IATSE did not more actively pursue the Cartoonists Guildthey were already in hot water and needed to cool off. Things were beginning to unravel for them and indictments were eventually handed down for tax fraud and conspiracy and many of those in upper level positions wound up being executed by the mob that feared they would talk.On March 19th 1943 Frank Nitti walked into a railway yard in Chicago and sat down against a fence. What happened next was ruled a suicide by authorities, but Frank was shot in the head, three times.

This leaves one nagging question: did Walt Disney get in bed with the mob to break the strike? My opinion is an emphatic No. Heres my rationale:

1. Walt was completely immersed in his work. He did not run with the fast Hollywood crowd. He was not the type, nor did he have the need to associate with the mobsters in L.A.; he didnt drink, do drugs, gamble, or have dalliances with prostitutes. And he surely was not well versed in the Chicago Mobs roster of known
associates.

2. Walt wanted to be the only one in charge of his studio in order to realize his vision. If he had known that Bioff and Browne were fronting for the mob there is no way he would want to get involved with them. I am sure he knew that once the mob gets a foothold they exploit the business for all it is worth.

3. He had no reason to be suspicious of Bioff and Browne; they were not of Italian ancestry, the Hollywood Shakedown was a new
racket on the west coast and due to Walts naivet in such matters he would not be as leery of Bioff and Browne as some of the other studio heads would be.

Walt did not have the rough and tumble, colorful background of the other studio heads. Sam Goldwyn, Louie B. Mayer and Eddie Mannix at MGM, Jack and Harry Warner, and Joe Schenck at 20th Century Fox came from tough east coast beginnings and had physically fought Thomas Edisons private detectives when Edison tried to enforce his motion picture patent rights long before Walt arrived in 1928. These men could hustle with the best of them and were experienced fixers who could make problems disappear when their stars got hooked on heroin, killed someone in a drunk driving accident, or got involved in a sex scandal. These were experiences that Walt never had to face as Mickey Mouse and Snow White never got involved in these situations.

No, Im quite sure that he only knew that Bioff and Browne had helped other studios when there were labor problems and there is no need to further question the legend and legacy of Walt Disney.