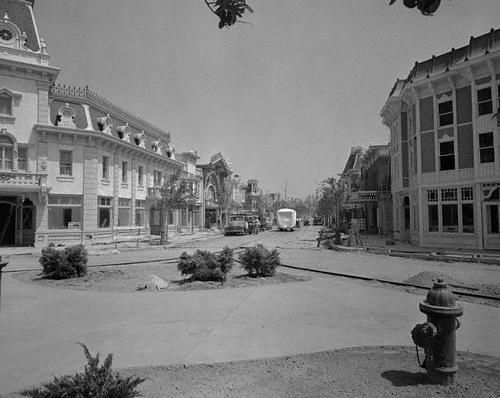 July 16 1954
More than 180 acres of South Anaheim Orange Groves begin their transformation into the “Happiest Place on Earth.”  To finance Disneyland, Walt Disney sells a vacation home and borrows against his life insurance.

January 15 1955
Despite plans to open the park without it, Walt decides to go ahead and build Tomorrowland, saying that the park can only open as a complete experience.  Admiral Fowler advised that the outlook for Tomorrowland was very grave, and despite the warnings, Tomorrowland was completed in six months and opened with the Autopia, Space Station X-1, and the Monsanto Hall of Chemistry.

Mark Twain makes its first circle of the Rivers of America.

The televised opening is hosted by Ronald Reagan, Art Linkletter, and Bob Cummings.

The 11,000 invitation only tickets to opening day are so easily duplicated that first day attendance shoots to 28,154, with an ABC television audience of 90 million.

One entrepreneur folds a ladder over the park’s backside fence and lets people in for $5.

October 1955
Disneyland Hotel opens on 60 acre site next to the Park.
Ticket books available for the first time, containing A, B, and C Tickets.

November 1955
On Thanksgiving, the Mickey Mouse Club Circus debuts with a parade down Main Street USA but is poorly received and discontinued in early 1956.

January 21: The Disneyland special “A Gala Day at Disneyland” was released. It showcased the opening of the Submarines, Monorail, and Matterhorn.

December 1966
At 9:35 AM December 15, Walt Disney, 65, dies of cancer.  Disney had been recovering from surgery a month earlier to remove one of his lungs.  His brother, Roy, takes charge of the Disney entertainment empire.

August 1970
Hippies protesting the Vietnam War invade the park August 6. Some parade down Main Street USA and speak of “liberating” Minnie Mouse.  Others take over Fort Wilderness on Tom Sawyer’s Island, yank down the 15 star American flag and raise a Viet Cong flag in its place.  The protest escalates when the park is ordered closed at 7 PM and 30,000 guests are escorted out.  Trash cans are set on fire and rocks and debris are thrown at police blocking the main gate.  Police make 23 arrests.

January 1973
Walt Disney Story opens on Main Street USA.  The exhibit includes memorabilia and pictures from the family’s archives and a short film on the park founder’s life.

January 1975
Mission to Mars, an updated version of Flight to the Moon, opens. America on Parade, honoring the nation’s bicentennial, premieres.

December 1976
Gorrilla’s in Camp added to the Jungle Cruise Attraction.

January 1977
Space Mountain opens after two years of construction. The $20 million attraction costs more than Disney spent to build the entire park in 1955.

January 1982
The E ticket remains in the language but disappears from Disneyland.  The passport, good for admission and unlimited use of park’s attractions, is introduced at a cost of $12 for adults.  July-Disneyland Band performs for the 50,000th time.

Work begins in the parking lot of Disneyland.  The monorail is rerouted about 40 feet closer to the center of the parking lot and some 10 foot deep holes are dug in the middle of a new fenced off area. A new ride based on the Indiana Jones character is being built.

May 1998
The new Tomorrowland opens.

August 1999
Disneyland introduces Fast Pass, a way to bypass long lines by getting a pass with a set return time.

January 2000
One Day Adult Ticket Prices increase from $39 to $41. Animator Marc Davis with Disney since 1935 dies on 1/12.  Marc played an active roll in the planning of Disneyland.  He developed story and character concepts for many Disneyland attractions, including Pirates of the Caribbean, the Haunted Mansion, and It’s A Small World. The Disneyland Kennel closes.

March 2001
March 16 – 450 Millionth Guest Admitted. (Mark Ramirez of Lytle, Texas). Mark Ramirez, a civilian production management specialist for the U.S. Air Force, was declared the 450 millionth visitor by Mickey Mouse just as he passed through the turnstile.  Ramirez was honored during a ceremony where he was presented with a lifetime pass to the Disneyland Resort (Disneyland and Disney’s California Adventure), a stay at the new Disney’s Grand Californian Hotel, and a gift pack.  He was also given the honor of changing the official attendance sign at the Disneyland park Train Station from 400 million to 450 million. “I’ll be able to point to the sign and say I made that change.  It’s great being a part of Disney history,” he said.  The family later rode in a cavalcade with Mickey Mouse down Main Street, U.S.A., led by the Disneyland Band.  In addition, the Ramirez family was treated to VIP tours of both Disneyland and the newest park Disney’s California Adventure.

April 2001
Disneyland announced that full-time city paramedics were being stationed at its Anaheim parks in case of emergencies.  Disney officials said they would beef up emergency services by stationing city paramedics full time at the park, a plan that will cost them $1.4 million annually and speed response time.

Disney Genie at Disneyland, Part One

9 Reasons Why You Can’t Miss Great Moments With Mr. Lincoln