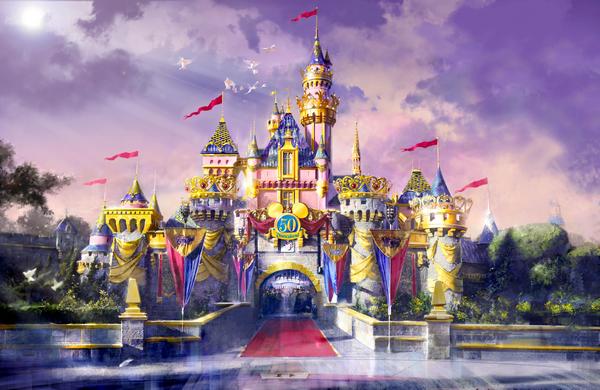 Biggest Event in Disney Theme Park History Premieres on May 5, 2005

ANAHEIM , Calif. , May 5, 2004 For the first time ever, the 10 Disney
theme parks around the world will join together for a global celebration to mark
the 50th anniversary of Disneyland in Southern California .

The Happiest Celebration on Earth pays tribute to Walt Disney’s dream
of Disneyland, the original park that introduced an entirely new genre of family
entertainment that now spans the globe and continues to offer the most visited
attractions in the world, drawing 100 million visitors on three continents every
year – – and still growing.

Beginning May 5, 2005 and extending for 18 months through 2006, the event
will take place in all of the Disney theme parks around the world, with the
premiere of exciting new shows and attractions at Disneyland Resort in
California, Walt Disney World Resort in Florida, Tokyo Disney Resort in Japan
and Disneyland Resort Paris in France and the opening of Hong Kong Disneyland.

Eisner noted that Disneyland has grown into a cultural phenomenon. The
dawn of the theme park industry rose from one man’s dream as he walked Anaheim
orange groves more than 50 years ago, and today, the sun never sets on Disney’s
global theme park landscape, Eisner said. Our Happiest Celebration on
Earth is another example of our continued commitment to creating innovative
entertainment experiences for the entire family, while saluting the nearly two
billion guests who have made Disneyland a national treasure and make Disney the
undisputed leader in family vacation destinations worldwide.

Since Disneyland opened its gates nearly 50 years ago, Walt Disney’s
flagship park has been praised the world over for serving as the foundation for
the modern theme park industry, and, moreover, for creating a unique place where
the entire family can have fun and enjoy wholesome, quality entertainment
together, said Rasulo. Disney parks are at the heart of a timeless
tradition for millions of families that pass down their experiences from
generation to generation. In honor of the park that started it all, every Disney
resort will join in creating more great memories for our guests with this
unprecedented global celebration, which promises to be the biggest event in
Disney theme park history.

At Disneyland , the global celebration becomes a unique chance for the
generations of guests who have been touched by the magic of Disneyland to return
to where the magic began and relive their fondest memories of park visits past
and create new memories with family and friends.

In addition to the recent opening of The Twilight Zone Tower of Terror
and Snow White an Enchanting New Musical, the Resort will be premiering new
and exciting shows throughout the 18-month celebration. We are celebrating
all those guests and Cast Members who have come to make Disneyland a cherished
experience, inviting them to relive memories and create new ones with family and
friends, said president, Disneyland Resort, Matt Ouimet. The celebration will
be the biggest event in the history of the park and will take different forms
throughout the Disneyland Resort – – even extending out to sea:

Sleeping Beauty Castle will be transformed into a
breathtaking focal-point for The Happiest Homecoming on Earth and will
glow with Disney enchantment as never before.

Audiences will be overwhelmed by the fun and spectacle of the new
Walt Disney’s Parade of Dreams, featuring one of the largest casts
of Disney Characters ever assembled.

An all-new fireworks spectacular entitled Remember . . .
Dreams Come True represents the most elaborate and extravagant in
the history of Disneyland .

In the all-new attraction Buzz Lightyear Astro
Blasters, guests pilot their very own Star Cruiser through a comical
interactive space mission where they will help to protect outer space from the
forces of the evil Emperor Zurg!

Space Mountain
will be re- Imagineered for the
21st century, featuring all-new out of this world effects and surprises.

Guests will experience Disneyland – – The First 50
Years, a remarkable new exhibit showcasing 50 years of Disneyland
and highlighting the amazing evolution of the park from concept to reality.

Block Party Bash – – At Disney’s California
Adventure guests will suddenly find themselves surrounded by the rollicking
music, excitement and fun of one of five instant celebrations.

Disney Cruise Line will launch its first-ever west coast
itinerary with celebratory cruise vacations out of the port of Los Angeles
aboard the Disney Magic to the Mexican Rivera.

The 12 seven-night cruises to Puerto Vallarta , Mazatlan and Cabo San Lucas ,
Mexico will introduce an exciting new way to vacation with Disney to a whole new
audience. Rasulo said, The great opportunity we have with the flexibility of
our fleet is the ability to expose whole new audiences to a completely new way
to vacation with Disney.

The worldwide Happiest Celebration on Earth will salute Disneyland by
taking different forms at each of Disneyland ‘s sister parks and resorts:

Walt Disney World Resort pays tribute to 50 years of Disneyland and Disney
theme park magic around the world with its most over-the-top event ever. Each of
the four Walt Disney World theme parks will feature an incredible attraction or
show imported from Disney’s parks around the globe plus a unique new
attraction will be created just for the Florida resort.

Guests to the Magic Kingdom will see a favorite princess begin her
Happily-Ever-After life during the magnificent, musical coronation of Cinderellabration,
direct from Tokyo .

At EPCOT, guests will take flight over the Golden State with the
opening of Soarin,’ based on the hit Anaheim attraction.

The secrets behind Hollywood ‘s most astounding stunts will be
revealed in the high-octane Lights, Motors, Action Extreme Stunt Show
at Disney-MGM Studios, direct from Paris .

At Disney’s Animal Kingdom from out of the secret labs of Walt
Disney Imagineering will come Lucky the dinosaur, the first-ever
free-roaming Audio-Animatronics figure. Later in the celebration
year, Expedition Everest will take guests to thrilling new heights in a
runaway mountain train.

Wishes – – A dramatic combination of glittering fireworks and Disney
music is set to light up the skies over Sleeping Beauty Castle in Disneyland
Park every night from 9th July until 28th August 2005. Inspired by a similar
show at Walt Disney World Resort in Florida , Wishes will be
accompanied by a specially arranged musical score, featuring favorite Disney
tunes and characters.

Disneyland Resort Paris will also honor Disneyland ‘s 50 th Anniversary with
a very special celebration in the summer of 2005. This special program will
salute Walt Disney’s dream of Disneyland giving guests a chance to remember the
first time they visited a Disney theme park with some Golden moments.

Tokyo Disneyland Park – – Disney’s very first international theme
park honors its namesake with a very special tribute in the summer of 2005 that
pays homage to Walt Disney’s dream of Disneyland .

Lost River Delta Thrill Attraction – – This new attraction at Tokyo
DisneySea will be the first at Tokyo Disney Resort to feature a vertical
360-degree loop and will offer guests a thrilling experience on a high-speed
ride through special effects employing fire and water when it opens in 2005.

As we celebrate the first 50 years of Disney theme park excellence, we do
so with unparalleled E-ticket thrills such as the new Mission: SPACE’
attraction at EPCOT and this week’s opening of The Twilight Zone Tower of
Terror’ at Disney’s California Adventure, said Rasulo. Our inspiration for
the future reflects the innovation and imagination of Walt’s vision, and in
honor of this great legacy we begin the next 50 years with this unforgettable
golden anniversary of his dream come true.

Additionally, Disneyland, worldwide outreach for The Walt Disney Company,
will join in the 50 th Anniversary of Disneyland by celebrating its role as a
magical place where the wishes of children from around the world come true. A
series of exciting signature events, in association with Make-A-Wish Foundation
, Starlight Children’s Foundation and Toys For Tots, will share many of the
ways in which Disney serves children and families in need.

Further outreach programs focused in Anaheim and Orange County will build on
Disneyland ‘s commitment to the local non-profit and education communities and
leave a legacy for years to come. Disney VoluntEARS will play a central role in
outreach activities, continuing to strengthen the relationships between
Disneyland cast members and the communities in which they live and work.