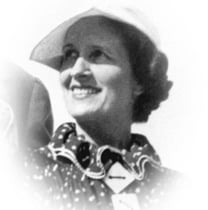 While Lillian Disney, wife of Company founder Walt Disney, worked behind the scenes in many ways to support the Company’s growth, her most celebrated contribution is the naming of a certain animated character.

In 1928, as he rode a train from New York bound for Los Angeles Walt devised a new character to turn around a serious business setback, Mortimer Mouse. Not Mortimer, Lillian replied when he told her his idea. It’s too formal. How about Mickey. The rest, as they say, is history.

Born in Spalding, Idaho, Lillian grew up in Lapwai, Idaho, on the Nez Perce Indian Reservation, where her father worked as a blacksmith and federal marshal.

She moved to Los Angeles in 1923, and won a job at the fledgling Walt Disney Studio as a secretary and inker of animated cels. Lillian met the boss, who sometimes asked her not to cash her $15-a-week paycheck. Soon, the boss met her family and on July 13, 1925, they married in Lewiston, Idaho.

I think my dad fell in love with her almost immediately … she was an independent little lady, says daughter Diane Disney Miller.

Lillian traveled with her husband on many of his business trips, including the government-sponsored Good Will tour of South America in 1941, which resulted in the production of such animated features as Saludos Amigos and The Three Caballeros.

While raising their two daughters, Lillian served as a sounding board for her husband as he created films and the theme park that made him and his company known internationally. Lillian was a conservative balance to Walt’s daring, and yet was indulgent, too, allowing him to dig a tunnel under her prized flower garden for his backyard railroad at their Holmby Hills estate.

As her nephew Roy E. Disney recalls, Lillian was always prepared to speak the truth, tough and warm and loving at the same time. She was a very special person. You couldn’t help loving her and you’d never forget her… or her hearty laugh.

The publicity-shy Lillian ventured into the public arena after Walt’s death in 1966 to lend support to the fulfillment of his dreams. In October 1971, she attended the dedication of Walt Disney World in Orlando, Florida along with Company co-founder and Walt’s loyal brother Roy O. Disney.

I think Walt would have approved, she said to Roy and those who helped realize her husband’s dream. Eleven years later, she returned to Florida to attend the 1982 dedication of EPCOT Center.

Lillian also lent support to Walt’s venture into education, the multi-disciplinary California Institute of the Arts (CalArts), which opened in 1971 in Valencia. Among her gifts to the school were funds to remodel a campus theater and rename it the Walt Disney Modular Theater in 1993.

On May 12, 1987, Lillian announced a gift of $50 million to build a new symphony hall designed by architect Frank Gehry in Los Angeles. A long-time patron of the arts, this was her ultimate gift to the community and to the love of her life. The Walt Disney Concert Hall, home of the Los Angeles Philharmonic, debuted in October 2003.

Lillian Disney suffered a stroke on December 15, 1997, 31 years to the day after the death of her husband, and died the following day.