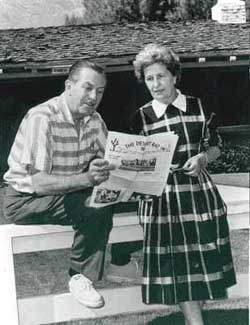 Warren Beatty once observed that if you get married in Hollywood, you should always do it before noon. That way if it doesn’t work out, you don’t kill your evening. But in 1925 Walt Disney, still getting his feet wet in Tinseltown was not interested in pampered starlets. His eye was on a employee of his named Lillian Bounds, originally from Lewiston, Idaho who worked for him as ink paint girl making fifteen dollars a week. She reminded him of the hard working girls he knew growing up in Missouri. For her part she found him charming, the way hegrew a mustache to look older in business meetings and how he refused to call on her until he could afford a new suit. Since he was more gentile around women than men, she was spared from the temperamental swearing that he did around his animators. Walt later joked, I didn’t have enough money to pay her, so I married her instead.

Early in their marriage Lillian loved going to movies with him and would listen attentively as he criticized his competitor’s cartoons and shared his own exciting ideas. But as time went by she became more challenging. Perhaps she understood he needed a sounding board, he was surrounded by yes men who were frightened of him. I don’t like the name

Mortimer, she told him in 1927. Why don’t you call your mouse Mickey? She agreed with his business partner and brother Roy in 1934 that making the first feature length cartoon, Snow White And The Seven Dwarfs would ruin them. When it turned out to be a smash hit, Walt took great pleasure in hearing Lillian admit she was wrong. But then he scared her again. Why would you want to build an amusement park? She asked him. Amusement parks are dirty. They don’t make any money. His reply didn’t make her feel better. That’s the whole point. I want a clean one that will. But she was at Disneyland the night before it opened with a broom, sweeping up the dust off the Mark Twain Steamer.

Walt was a good provider for Lillian and their two daughters even if he had to be in debt to do it. It pained her when he had to sell his Mercedes during the depression to meet the studio payroll, or when old friends would call on him for a loan and he was so tapped out he had turn them down. They were both content to spend evenings at home avoiding the publicity glare of Hollywood parties. When times were better she put up with Walt called his one sin owning six polo ponies, which he paid for dearly by taking a nasty spill. He became a life long scotch drinker to dull the reoccurring pain in his neck. His next hobby annoyed her more, a miniature railroad in the backyard that ran through her flowerbed. She gave in only because it seemed to give him a release from studio pressures. Sometimes she thought maybe he was using the rides to hide out and avoid facing overwhelming problems. Later, Disneyland would provide him with a bigger train giving Lillian more peace at home.

Lillian didn’t worry about Walt cheating on her with another woman but would sometimes get jealous of his work. Often he would come home late, choosing instead to spend the night at the studio prowling around his animator’s desks, even going through their trash cans to pull out their best ideas. One time he arrived late for a date and drunk. Angrily she locked him out of the house. He made amends the next day by presenting her with a female puppy in a hat box. That event later became the basis for the Disney classic Lady And The Tramp (1955).

The Disney’s were world travelers. Lillian was thrilled to get the call from Walt to pack up for their next surprise vacation and marvel how he would turn their experiences into Disneyland attractions. They fell in love with skiing in Switzerland and it lead to the Matterhorn Bobsled Ride. They enjoyed buying antiques in the French Quarter, inspiring the creation of New Orleans Square. They learned about hidden treasure on a island near Cuba sparking the construction of The Pirates Of The Caribbean, which Walt did not live to see completed.

Lillian fell short of her own dream. She did not share Walt’s love of classical music, preferring to listen to Lawrence Welk. But she felt his pain when Fantasia (1940) failed at the box office. In 1987, 21 years after he passed on, she donated fifty million dollars to build the Walt Disney Concert Hall which would be the new home for the Los Angeles Philharmonic. What better legacy than to bring Beethoven and Mozart to the masses just like Walt wanted. But she became discouraged when her idea for a simple brick building became much more elaborate in the hands of architect Frank Gehry. Soon the fifty million was gone and she wanted it back fearing she had wasted her money on an incomplete boondoggle. Her daughter Diane convinced her that Gehry’s design was wonderful but she died six years before the hall opened.

One great thing about Walt building Disneyland was that he and Lillian got to play tour guide to world leaders. But Mrs. Disney was very disappointed when the head of Russia Nikita S. Khrushchev and his wife failed to come to the park in 1960. The Anaheim police said they could not provide enough security. The Soviet Prime Minister grumpily settled for a star studded luncheon at Twentieth Century Fox instead. During the meal Frank Sinatra was informed of Mrs. Khrushchev’s disappointment at missing out on The Magic Kingdom. Old Blue Eyes slammed his fist on the table. Screw the cops. I’ll take the old broad down there and watch her myself. He grabbed her by the hand and was near the door when he was stopped by the KGB. Back at Disneyland Walt made Lillian smile by telling her he was just as disappointed as she was. He was dying to show the Communist ruler his new submarine fleet.