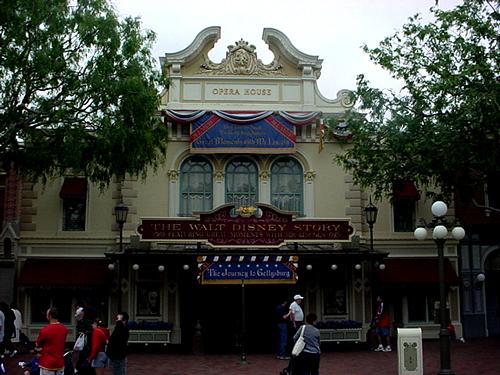 ANAHEIM , Calif. , May 5, 2004 ‘ On May 5, 2005 the Main Street Opera House in Town Square at Disneyland will help launch the park’s milestone 50th anniversary with the premiere of ‘ Disneyland ‘ The First 50 Years.’ Produced exclusively for the 18-month long ‘The Happiest Homecoming on Earth’ celebration, the all-new attraction features a specially created historical exhibit and a nostalgic film journey through the first five decades of the Disneyland story.

The experience of ‘ Disneyland ‘ The First 50 Years’ begins in the Opera House lobby where guests will enjoy a detailed exhibit of artifacts including authentic attraction models, concept artwork, layouts and maps that will relay the fascinating story of how Walt Disney and his original team of ‘Imagineers’ conceived, designed and built the world’s first Disney theme park.

A focal point of the exhibit will be the original pencil aerial schematic of Disneyland created by legendary Disney Imagineer Herb Ryman. Created by Ryman and Walt Disney over a weekend in 1954, the rendering was the very first overall visual interpretation of the Disneyland concept.

Inside the main theater guests will enjoy a newly produced film retrospective highlighting the first five decades of Disneyland . The film will take guests on a heartwarming journey through the many memorable milestones that have made Disneyland a national treasure. Using archival photographs, familiar Disney tunes, narration by Walt Disney himself and newly discovered film footage (most of which has not been seen in nearly 50 years) audiences will relive their own favorite Disneyland memories. Along the way they will catch glimpses of some of the park’s more famous visitors through the years, beloved attractions (past and present) and the numerous fun-filled special events and entertainment that have characterized the spirit of Disneyland over the past 50 years.

Following the impressive film presentation guests will encounter another exhibit showcasing the Disneyland that never was, including the stories and artwork of attractions and shows planned but never realized. The exhibit will also offer hints of what’s to come in the years ahead.

We’ve created an attraction that will really appeal to our core guest’reminding them of why they love Disneyland’as well as that first-time visitor who might not know much about the rich history of the park,’ said Barry Braverman, senior vice president, Walt Disney Imagineering. ‘It’s the kind of attraction that guests will visit time and again throughout the 18-month celebration, making new discoveries with each visit.

Premiering on May 5, 2005 ‘The Happiest Homecoming on Earth,’ an extraordinary celebration of the golden 50th anniversary of Disneyland, will pay tribute to the millions of guests and Cast Members who have contributed to the rich legacy of ‘The Happiest Place on Earth’ over the past five decades. The 18-month long occasion represents the biggest celebration in the history of Disney theme parks and is the first truly global Disney event (with commemorative events planned at each of the Disney theme parks around the world in salute to Disneyland).