ANAHEIM, CA. (June 13th 2012)
DisneyDreamer.com was at the Reopening of DCA


The 12-acre Cars Land is a fully detailed, three-dimensional re-creation of
Radiator Springs, known to fans of the Disney-Pixar movie �Cars� as �the cutest
little town in Carburetor County.� Cars Land features three new attractions:
Luigi�s Flying Tires, Mater�s Junkyard Jamboree and the thrilling
Radiator Springs Racers, one of the
largest and most elaborate attractions created for a
Disney theme park.  Adding to
the guests� impression that they have stepped right into the town featured in
the blockbuster film, Cars Land features all the familiar landmarks of Radiator
Springs, including its shops, restaurants and neon signs. 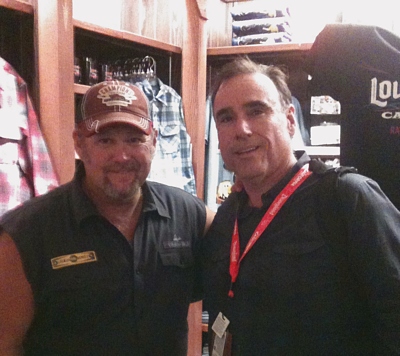 Cameron from DisneyDreamer.com caught up with Larry the Cable
Guy.(Daniel
Lawrence Whitney) 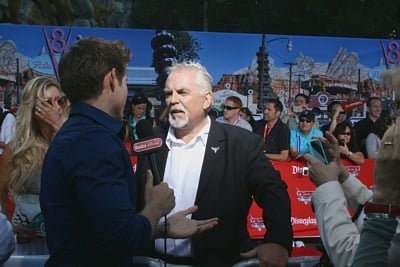 John Ratzenberger (on the red carpet) has
performed the voice of at least 1 character in every feature-length Pixar
production. Voice of Mack in Cars 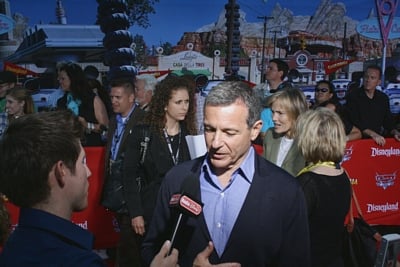 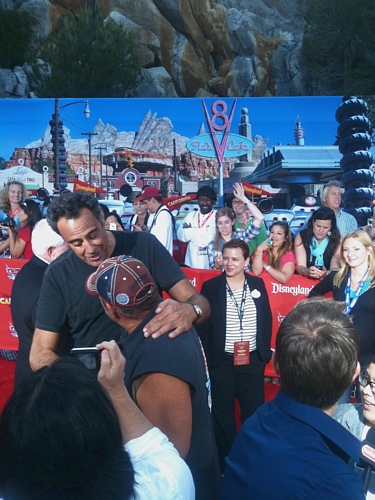 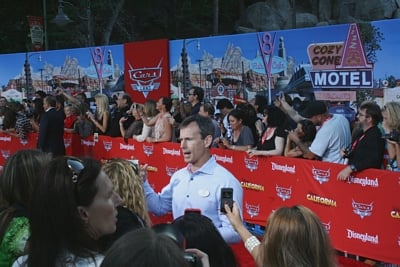 Thomas O. Staggs
chairman of the Walt Disney
Company‘s Parks
and Resorts division
talks with fans on the red carpet.

Matterhorn Bobsleds:
This thrilling attraction, a
Disneyland landmark since 1959, reopens June 15 following a five-and-a-half
month project which refreshed the mountain inside and out, including glistening,
new paint and �snow caps� on the outside and new lighting on the menacing Yeti
inside. New three-person bobsleds allow guests to be seated individually.

In addition, mountain climbers will thrill
guests as they scale the Matterhorn slopes. Unseen on the Matterhorn for several
years, they return this summer.

Not far from the Matterhorn lies magical
Pixie Hollow, where the weather will
be changing this October when a new friend arrives to visit Tinker Bell. Frost
fairy Periwinkle, from the upcoming Disney video �Tinker Bell: Secret of the
Wings,� joins Pixie Hollow as it is adorned with frost and ice. Tinker Bell will
be clothed in winter gear, too, and her ingenious snow-making machine will help
keep Periwinkle cool.

Another new face at Disneyland is
Merida, the adventurous, red-headed
heroine of the upcoming Disney�Pixar movie �Brave.� The brave and impetuous
visitor from the Scottish Highlands can be found in an interactive meet-and-play
experience near �it�s a small world� where young guests can test their skill
with a bow and arrow, be part of a Scottish clan, and enjoy the silly antics of
Merida�s three wee bear cubs.

In Frontierland, the newly premiered
Big Thunder Ranch Jamboree brings
music, dancing, crafts, pin trading and plenty of Disney characters (in Western
wear) to the space previously known as Festival Arena. Guests may join in and
kick up their heels with Billy Hill and the Hillbillies at an old-fashioned
Cowboy Roundup or gather to enjoy live performances by visiting schools and
community groups, presented by the Disney Performing Arts Program.

From Center Street to the Central Plaza at the entrance to
Adventureland, Frontierland, Fantasyland and Tomorrowland, the west side of Main
Street, U.S.A., now features an array of refreshed shops and restaurants, their
turn-of-the-century interiors newly redecorated with period signs, lighting
fixtures and woodwork.

In the Main Street
Opera House, the Voices of Liberty,
an a cappella vocal group inspired by the popular Voices of Liberty at The
American Adventure attraction in Walt Disney World, Florida, will perform
patriotic songs to entertain guests awaiting the �Great Moments with Mr.
Lincoln� presentation.

COMING TO DISNEYLAND IN SPRING 2013:

Disney princesses will greet their admirers in a new
Fantasy Faire, a magical place
nestled near the moat of Sleeping Beauty Castle.
Aspiring princesses and knights of all ages may enjoy a visit with a
Disney Princess, play a special role in a charming storytelling experience, or
visit a merchandise shop filled with royal costumes and accessories. And as the
Princesses settle in their new home in 2013, plans will be underway for an
all-new show at the Fantasyland Theatre near �it�s a small world.�

In addition to the exciting opening of Cars Land, Buena Vista
Street and Carthay Circle Theatre in summer of 2012, Disney California Adventure
offers guests an array of new entertainment, including the nightly �Mad T Party�
in Hollywood Land, new shows in Cars Land and Buena Vista Street, and the return
of the �Pixar Play Parade.�

�World of Color,� the stunning
water, laser and animation spectacular on Paradise Bay welcomes
Merida, the adventurous heroine of
Disney�Pixar film �Brave,� in a new �World of Color� sequence starting June 15.
She�ll be seen racing across the highlands, bow and arrow in hand, on her
faithful horse Angus, all to the accompaniment of composer Patrick Doyle�s
stirring Scottish score for the movie.

Ghirardelli Chocolate Company joins the excitement of the
Disney California expansion with the newly opened
Ghirardelli Soda Fountain and Chocolate
Shop in the Pacific Wharf area. Similar to the Ghirardelli location in
Downtown Disney at the Walt Disney World Resort, and located for the first time
inside a Disney theme park, the new chocolate shop offers world-famous hot fudge
sundaes and chocolate products. In a Ghirardelli tradition, each guest will
receive a complimentary sample of its signature Ghirardelli Squares chocolate.

AT THE DISNEYLAND HOTEL:

The multi-year renovation of the Disneyland Hotel is now
complete, featuring 973 remodeled rooms in re-themed hotel towers, and a unique
collection of themed suites including the Mickey Mouse Penthouse, Pirates of the
Caribbean, Adventureland, Big Thunder and Fairy Tale suites. The AAA Four
Diamond hotel also is home to a new, immersive water play area and courtyard
featuring a replica of the original Mark I Monorail Car at the entrance of two
water slides. New dining locations include
Tangaroa Terrace, featuring
Island-inspired fare for breakfast, lunch and dinner, and
Trader Sam�s
Enchanted Tiki Bar, serving a mix of
signature cocktails and creative appetizers
along with live music performed on the patio each evening.

Walt Disney Knew How To Get The Word Out

A Guide for Teachers