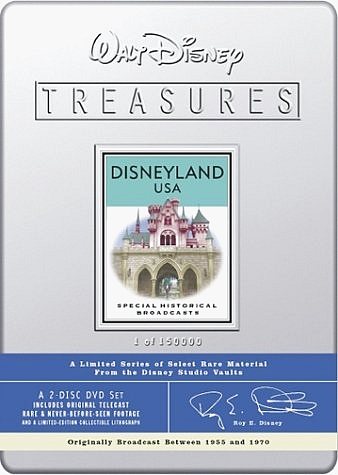 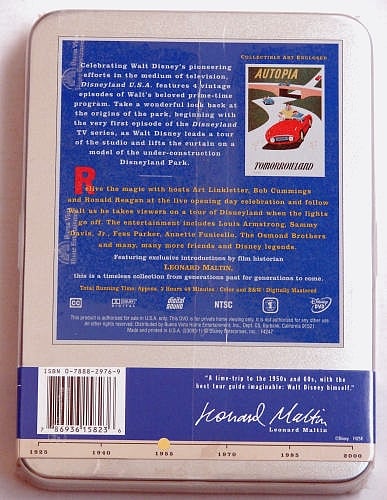 On July 17, 1955, Walt Disney opened the gates to Disneyland�, the beloved American icon that has become a cherished
destination for generations.

It was also the day Walt’s sixteen-year dream came true. The centerpiece of this
volume is a captivating and nostalgic film that takes you inside that dream.
Rare archival footage, new interviews with key people and Walt’s own words
reveal how his innovative vision became a reality. Then discover more
Disneyland(R) secrets with a fun-filled trivia game, and relive the magic of the
recently restored PEOPLE AND PLACES: DISNEYLAND U.S.A. presented in CinemaScope
with a new 5.1 audio mix. Featuring exclusive introductions by film historian
Leonard Maltin, this is a timeless collection from generations past for
generations to come.

Walt Disney was a visionary when it came to entertainment. This 2 DVD collection
showcases one such example, his theme park Disneyland, as it was portrayed on TV
during his lifetime.

This set contains four programs. The first is the first ever episode of the
TV show Disneyland. It introduces the park and future episodes of the show. At
the end, it includes several Mickey Mouse cartoons, including “Sorcerer’s
Apprentice” and “Lonesome Ghosts.”

The second program is the opening day live broadcast. I enjoyed finally
getting to see it. Technical problems aside, it’s quite fun.

The second disc contains “Disneyland after Dark,” an episode of the TV show
that includes some great shots of the place at night, but is mainly a show of
people performing at various places in the park.

The last program is the 10th Anniversary show. This one was most interesting
because it featured the planning stages of “Pirates of the Caribbean” and the
“Haunted Mansion,” as well as a look at how the park had changed over its
initial 10 years.

This is a collection a Disney die-hard, like me, will enjoy. It’s got some
great behind the scenes info and Disney history to keep us satisfied. However,
the average consumer will probably not enjoy it as much. Frankly, I probably
won’t watch it as much as some others from this series. Still, for its historic
significance and fun for the Disney fan, I rate it 4 stars.

This picture was taken during the opening broadcast of Disneyland