DisneyDreamer.com was thrilled to get the “save the date” passport in the mail for this event, especially because we are all big Star Tours fans. After we confirmed we had two things to say-thank you Erin Glover and STAR TOURS BABY! Passport pictured below is the one we received when we checked in at the media box. 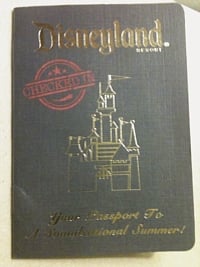 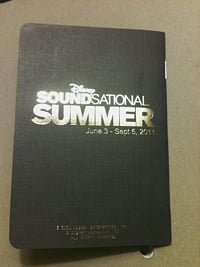 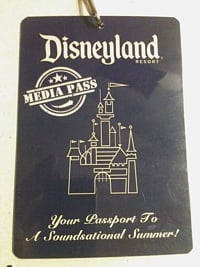 Ok, here is your Media Pass let’s head on in! 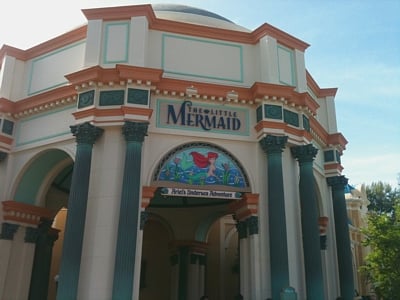 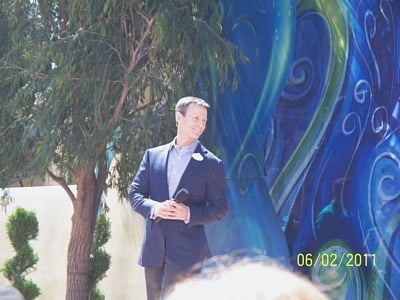 The stage for this event was well done with a beautiful backdrop of Little Mermaid as well as themed curtains, very well thought out and executed. Below is a shot of the press box riser located directly behind the rows of white chairs that held many involved in the movie the ride and the overall process. 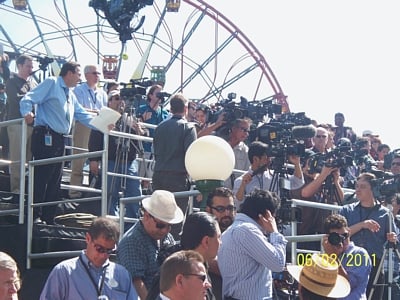 I thought this event was especially well done, it started off promptly at 3:30 p.m. on Thursday with Mr. Tom Staggs chairman of Walt Disney Parks and Resorts addressing the media and then in short order introducing Alan Meken. Mr.Menkin is credited with many Disney works including the Little Mermaid. He has won 8 Oscars, actually to read up on this amazing composer and see the list of works visit his IMDb page. 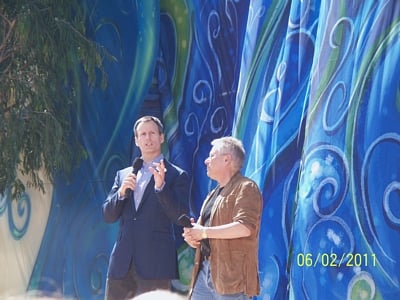 Next we heard from Jodi Benson the original voice of Ariel sing “Part of Your World” she nailed a spot on performance.. even though it was a bit windy, the sound system and her voice did not reflect it one bit. This really lit this event on fire, that song seemed to just resonate with everyone in attendance including Alan Menkin. 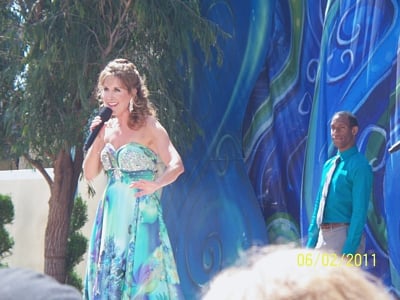 Next out was Sherie Rene Scott the original Broadway voice of Ursula, if Pat Carroll (original voice of Ursula in the film) intimidated her by sitting in the second row behind Alan Menkin she sure didn’t show it-her Broadway experience was sure evident in how she sang and worked the crowd. “Poor Unfortunate Soul” never sounded better as she brought out the character we all love to hate.

Everyone joined onstage for a wonderful finally that was topped off with streamers and confetti showering down form above. Pat Carroll was so gracious, at 84 years old I could see how genuinely happy she was at this event-Disney staff was insisting on getting her to her next appearance and she overruled and gave some lucky fans just one more picture and one more hug. She actually said about the staff directing her away-“they seem like bad guys but they are not” this struck me as ironic, you know Ursula and all…oh never mind. Now the moment we had all been waiting for… a venture into this new dark ride. DCA has been yearning for this type of attraction for years, no matter what side of the fence you were on when DCA opened almost all agreed -we needed something more. Little Mermaid in my opinion ranks up there with the best of any of Disneyland’s most successful early original dark rides. If I had to rank a more recent ride “The Many Adventures of Winnie the Pooh” over at Disneyland on a scale of one to ten (though Pooh is my all-time favorite Disney Character) I would have to give it a 5.5 – with Mermaid I would give it a 9 right out of the gate. I guess maybe I am a little harsh on Pooh because I miss the County Bears and my favorite part of Pooh has become looking over my shoulder at the end and seeing Buff, Max and Melvin looking sad and lifeless. Mermaid is laid out brilliantly- the music and the show are done meticulously-the colors are amazing it is like a breath of fresh air at DCA you will have to see and judge for yourself but as a Disneyland purist -whatever that means-I say they nailed it on this one. You start by entering a beautiful building probably the nicest building at DCA, you queue up into shells that take you undersea.

Below are a few shots from inside the ride itself. My staff and I appreciated walking on the ride no less than three times, we realized it was going to be a long time, if not all summer that this ride would be a walk on. After the media event we saw a line that was at least 1.5 hours long. When you go- try to visit this new attraction and the opening of DCA.. just before close or during a parade this may alleviate some wait times. All in all the media event for this attraction and the new ride itself were just amazing and now immortalized in DCA, this ride based on the iconic movie is going to be enjoyed my many, for many more years to come. 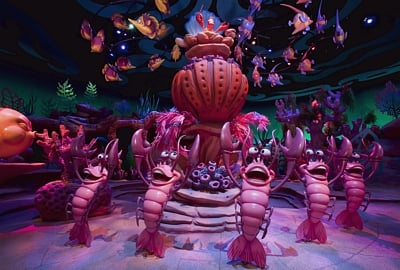 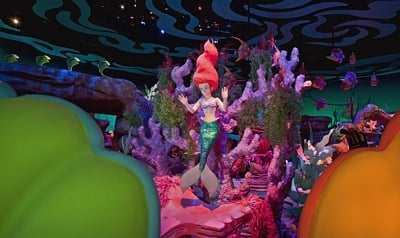 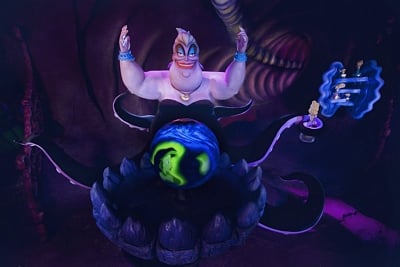 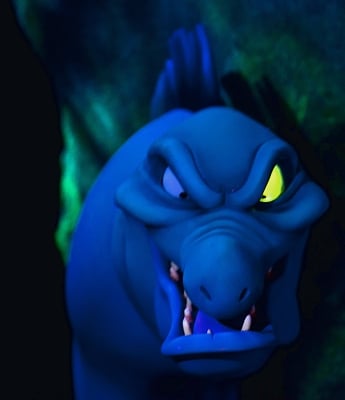 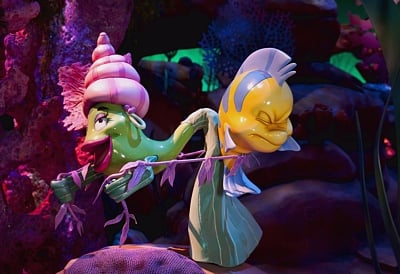 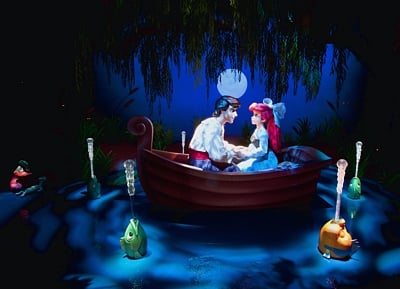 The Little Mermaid ~ Ariels ‘Undersea Adventure opens to guests on June 3, 2011, at Disney California Adventure park. This whimsical underwater adventure begins when guests board pastel-colored clamshell vehicles and head ‘under the sea’ to visit Ariel and her friends in a musical retelling of the classic motion picture. During this immersive experience, guests will see the Little Mermaid falling in love, getting her legs, losing her voice and winning the prince as the best-loved musical numbers bring the attraction to life all around them.