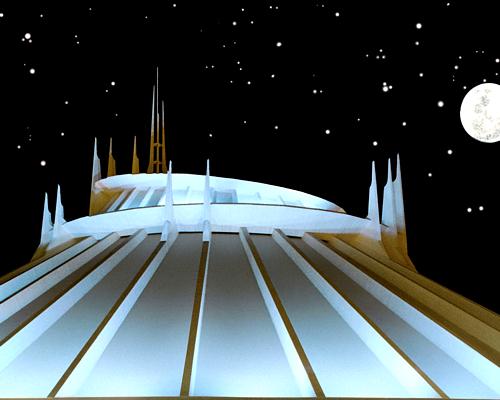 RE-IMAGINEERED FOR THE 21st CENTURY AND “THE

ANAHEIM , California. , May 5, 2004 ” On May 27, 1977 , the U.S. Mercury Astronauts (the first men in space) took the first official flight on ” Space Mountain ” during its grand opening festivities.  Almost instantly the state-of-the-art thrill attraction garnered a reputation for fun and excitement thus becoming one of the most perennially popular attractions at Disneyland park.

Now as Disneyland prepares to commemorate its milestone 50th anniversary with “The Happiest Homecoming on Earth” celebration, the landmark Tomorrowland attraction and icon will undergo a major transformation, ensuring that it remains one of the most famous, exciting and cutting-edge Disney theme park adventures of all-time.  Already the exterior futuristic spires and slopes of ” Space Mountain ” have been restored to their familiar gleaming white color while the attraction”s interior is being completely revamped.

“We”re preserving the underlying storyline and visual style of the attraction to stay true to the many loyal fans of ” Space Mountain ,” said Barry Braverman, senior vice president of Walt Disney Imagineering.  “Additionally we”re adding a new generation of special effects, state-of-the-art show elements, new rocket vehicles and an upgraded sound system to take it to a whole new level.”

The boarding area will feature a new hi-tech launch port and an updated vehicle probe.  Guests will feel as if they have a first-hand look into space, as a space station rotates around the earth.  After launching through a disorienting tunnel, riders will have a close encounter with a large meteorite.  “We call it our “surprise in the sky,”” added Braverman.

The remainder of the pulse-racing adventure will be filled with billions of stars racing by and an all-new edgy, heart-pounding instrumental sound track before guests experience an entirely new finale featuring a longer re-entry tunnel filled with spectacular lighting effects.

“The attraction will still be fast, dark and unpredictable,” said Braverman.  “It will be a thoroughly re-Imagineered ” Space Mountain ” for the 21st century.”

The initial concept for ” Space Mountain ” originated with Walt Disney himself back in the early 1960s and was known simply as ” Space Port. ”  The concept became a reality in 1975 when the first incarnation of ” Space Mountain ” premiered in the Magic Kingdom Park at Walt Disney World Resort in Florida .  After 12 years of planning and over one million man-hours in design and construction, ” Space Mountain ” made its Southern California premiere in Tomorrowland at Disneyland in 1977 to eager would-be space travelers.

Walt Disney Knew How To Get The Word Out