THE TWILIGHT ZONE TOWER OF TERROR 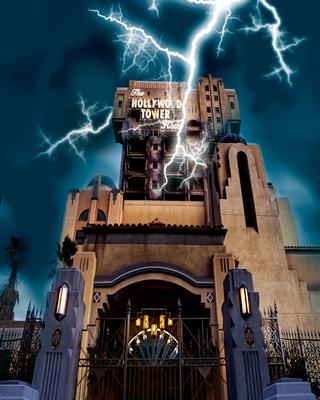 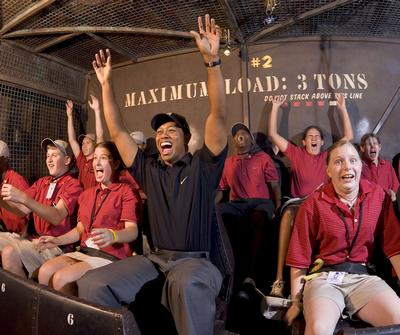 Tiger Woods on a Recent Visit to DCA

Props: The Lobby features an extensive array of period props and furniture
that creates a bygone era of Hollywood splendor. Magazines and newspapers from
1939 are casually placed just where the guests left them. At the front desk, a
set of luggage remains where a guest was about to register. On a table, a deck
of cards, a cribbage board, two wine glasses�all carefully placed to indicate
that the people in this lobby left in a hurry without a thought of taking
anything with them – and never came back.

The Boiler Room is especially rich in prop and set details that suggest an
actual working facility, from the time clock to the maintenance man’s desk
filled with photos and personal effects.

The Library contains the richest cache of Twilight Zone � referenced props,
including:

In �Modern Wonders� store front along the exit corridor:

�  Box Camera – � A Most Unusual Camera � – A camera that photographs
the future.

Other references from The Twilight Zone � :

Location: The Hollywood Tower Hotel is located in the southeast corner of the
Hollywood Pictures Backlot. The site is typical of an upscale, urban hotel in
the Hollywood area in the late 1920s. The building is oriented so that it can be
seen from the Sun Plaza of Disney’s California Adventure.

DESIGN: Towering 183 feet above Sunset Boulevard on the Hollywood Pictures
Backlot, the Hollywood Tower Hotel recalls the faded grandeur of period hotels
from the �Golden Age of Hollywood.� Abandoned and fallen into disrepair, the
glamour that the hotel once exemplified is still apparent. The pale ochre
colored hotel appears to be locked in time, with nothing changed since its
sudden closure in 1939, when five unlucky souls mysteriously vanished on �one
stormy night, long ago� as they rode the elevator to the top of the tower.
Guests to the attraction are invited to repeat their journey, if they dare.

This journey leads them through the lobby, the library, and into the boiler
room and a bank of service elevators which are still operational after over 60
years. As it carries guests up the tower, the elevator stops to reveal strange,
disquieting sights and sounds. At the top of the tower, the elevator doors open
to reveal a gaping hole in the tower and a brief view of the outside world
before the elevator plummets.

Architectural Style: � The Twilight Zone Tower of
Terror� is housed in an abandoned luxury hotel, reflecting the architectural
style known as Pueblo Deco. This stylish, beautifully detailed structure creates
an immediate, haunted, otherworldly impression, appropriate to its Twilight
Zone � theme. Pueblo Deco, popular when the hotel was built in the 1920’s,
is characterized by the clean, geometric shapes common to the Art Deco style.
However, from southwestern Native American art, it borrows elements such as
radial sunbursts, arrowhead shapes, and simplified thunderbird motifs. A prime
southern California landmark in the Pueblo Deco style is the L.A. City Hall
Building.

Landscaping: The landscaping has been designed to reflect
what was typical of an upscale hotel in 1930s southern California . Chinese
flame trees, magnolias, and various forms of palm trees have been used. A
particularly beautiful specimen of coral tree is located near the Disney’s
FASTPASS � light rail station. Overall, a sense of neglect is suggested in the
look of the landscaping to accompany the tone established in the architecture.
For instance, dead palm fronds have intentionally not been stripped from the
palm trees, to indicate a lack of care for many years. Tall grasses grow among
the shrubs and ground cover, contributing to the “unkempt by design”
look. 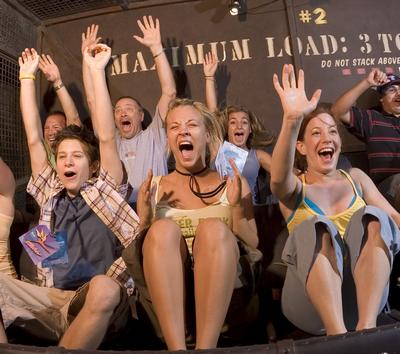 This picture was taken during the opening broadcast of Disneyland

When Walt Disney opened Disneyland in 1955