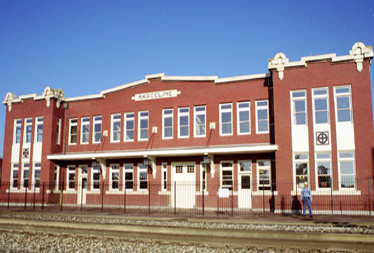 Walt first came to Marceline by train when he was five years old. The Santa Fe
train arrived at the depot that preceded the present-day one, which was
rebuilt in 1913.

When Walt returned to Marceline for the first time in 1946, the depot evoked his first memories of pulling into Marceline. So it is fitting that the museum dedicated to one of the most influential persons of the last century is housed in this restored Santa Fe Depot.

The Walt Disney Hometown museum is the recipient of a unique collection of family effects, never seen anywhere else in the world. Visitors to the museum are treated to:

Walt Disney’s Hometown Museum is quickly becoming regarded as the place to get closest to the man who has influenced so many of us personally. While perusing this special museum, you’ll feel transported to a simpler time and unlike the hustle and bustle of the Disney Theme Parks, you’ll feel closeness and get an intimate understanding of Walt Disney and his amazing life history family.

And the Museum isn’t all. So much history of Walt is throughout the town. After you’ve seen the museum, you’ll want to visit the Dreaming Tree and Walt’s Happy Place at the old family farm, spend some time in Ripley Park, take a stroll around the lake at the Walt Disney Park Complex and watch the sun set, go antiquing down Main Street USA or just sit and watch the trains go by just outside the Museum or from a viewing window in the baggage room (we guarantee you won’t have to wait long with more than 70 trains passing through Marceline each day). There are also several special tours, please select the Tours option from the menu on the left.

Whether you are a die-hard Disney fan, love the Disney Parks Movies or just want to know more about Walt Disney, we want you as part of our family. Become a Charter Member of the Walt Disney Hometown museum today and you’ll not only receive free
admission to the museum every time you visit, but you’ll receive some very exclusive family benefits for Charter Members only. But hurry, these Charter memberships are limited.

By his own account, Walt’s happiest childhood memories were of his time in Marceline and the family farm there. Walt and his sister Ruth spent many happy hours playing in the Barn. Visitors from all over the world have come to Marceline to spend
time at “Walt’s Happy Place”, located in its original place on the Disney family’s old farm in Marceline.
Visit this very special Barn, which was rebuilt by volunteers in 2001, and leave your mark among the thousands of signatures, messages and memories already there to share with the rest of the world. There’s no doubt about it,
when you come to this Barn, you’ll feel a special heart connection to Walt.

The large cottonwood tree still stands where Walt and Ruth played and waded in the spring that ran at its base. Daydreaming under this tree, a young Walt would observe the nature surrounding him. He later called these adventures “belly botany&quot and drew from these moments in his early works. He apparently never outgrew his need for inspiration from his favorite spot. On trips back to Marceline, Walt always put aside time for reflection beneath it, spending hours alone with his thoughts, back under his Dreaming Tree.

The tree still stands today and visitors are welcome to sit beneath it. Enjoy sitting in the same spot that Walt himself sat while you experience your own belly botany, gather inspiration or just imagine what it must have felt like for Walt.

Walt made the decision that every visitor to Disneyland would walk down Main Street USA, inspired by his hometown of Marceline, Missouri.

Today, you can shop at Murray’s Department store, at the same location for over 100 years (and also the store where Walt purchased his first pair of engineer overalls), and visit other quaint shops on the “original” Main Street USA.

Have lunch in the same building Elias Disney served an oyster dinner to local farmers in hopes of organizing them inot a union.

Stroll past the Zurcher building and see the original Coke mural that inspired Coke Corner at Disneyland. 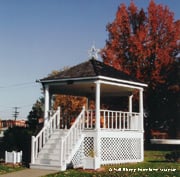 In 1898, the Santa Fe Railroad donated land to the City of Marceline for a park that was named after the president of the railroad, E.P. Ripley. It soon became the pride of the community and a favorite meeting spot. Walt Disney was powerfully influenced by the railroad and named one the first steam locomotive to operate at Disneyland, the E.P. Ripley (it was also said to be his favorite.)

The Gazebo,
located in Ripley Park was built in 1898 and is where the traditional Sunday
concerts took place. The Disney family would often attend the band concerts at
the Gazebo. Flora Disney would spread a quilt and the family would spend the
afternoon visiting friends and listening to music. Sometimes Elias Disney
would join in with his fiddle. Today, the traditions of meeting with family
and friends at Ripley park continues.

Also located in
the Park is the static display of an original Santa Fe 2546 steam locomotive,
which Walt had painted as the Santa Fe Disneyland RR locomotive on one of
his return visits to Marceline.

In 1968, the US
Postal Department issued the Walt Disney commemorative stamp.
The entire Disney family was in attendance along with thousands of Disney
fans. On August 23,
2004, the US Post Office was officially renamed the Walt Disney Post Office
and it is the only federal building named after Walt Disney.

The Walt Disney
Park Pool was dedicated July 4, 1956. Walt and Roy along with their wives
were in attendance at the dedication. While speaking to the crowd Walt said,
“I feel very humble to think that you all wish to name this the Walt Disney
Municipal Pool.”

This park is also
the site where the Midget Autopia, which was donated by Walt Roy O. Disney,
became the first attraction ever to leave and be operated outside of
Disneyland. A track was constructed in the Park and the lucky children of
Marceline were given the opportunity to take a ride. Today, you can still
still the tracks which remain and a restored Midget Autopia vehicle at the
Museum.

The beautiful park
grounds are open year-round and the pool is open May through August. Admission
is charged for the pool.