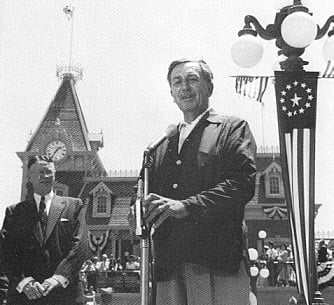 Months before Disneyland opened, Walt became a grandfather for the first time. He was absolutely delighted. But there was one disappointment: Walt had hoped his first grandson would be named after him, and Diane had decided to name the baby Christopher. “Afterwards, I felt that we had made a mistake,” she said. Walt would have to wait while Diane had three girls before Walter Elias Disney Miller was born. In all, Diane would have six children during Walt’s lifetime — a seventh after he died. Sharon, who married an architect named Bob Brown in 1959, would have one child, Victoria, during Walt’s lifetime. Two more would follow later. Walt was a loving, doting grandfather. “He always had a camera with him,” recalls granddaughter Tamara. “He had a tendency of handing the camera to a child. There’s a great series of him crouching lower and lower as a child took the pictures.”

Though there are now many themed amusement parks, Walt’s was the first. As Disneyland historians David Mumford and Bruce Gordon write, “Everyone has a hometown, and Walt always considered his to be Marceline, Missouri.” To welcome guests to Disneyland, Walt would invite them into his home, or rather his hometown. A single corridor, themed as a “better than the real thing” midwestern Main Street, would guide guests into the heart of Disneyland. From there, they could choose to enter a number of themed lands, each of which was based on a world that was near and dear to Walt’s heart and populated with the characters he loved. Mumford and Gordon write, “Stories of the construction of Disneyland are legendary. From the Frontierland riverbed that leaked dry the first time the banks were filled, to the flying Dumbo elephants that were too heavy for the ride’s armature, it was clear nothing like this had ever been built before.”

Several days before Disneyland opened, Walt and Lilly celebrated their 35th anniversary at the park. It was a happy night for the family, complete with Walt and Lilly dancing on the stage of the Golden Horseshoe. Diane recalls her father in the backseat of the car on the way home, holding a rolled-up Disneyland map: “He was tooting through it like a little boy with a toy trumpet. And then he was singing a song. And before I knew it, there he was like a little boy, sound asleep, with his trumpet folded in his arms.” Opening day of the park was televised on a 90-minute live television program that was the most-watched TV event up to that time. Some 20 cameras posted around the park telecast a vision of exciting attractions, heartfelt dedications, and relaxed commentary from Art Linkletter, Bob Cummings, and Ronald Reagan.

But like so much on television, reality didn’t quite live up to the illusion. In fact, the park wasn’t really ready for prime time yet. Opening day, rides broke down; there were too few trash cans; lines were far too long; not enough water fountains were operating. Perhaps worst, thousands of counterfeit invitations had been distributed, and so the park was overloaded, while the roads leading to Disneyland were jammed with bumper-to-bumper cars filled with irate passengers. But opening day was soon over, and most of the problems were fixed. Better yet, Walt was able to start making changes and improvements. Dumbo Flying Elephants, 20,000 Leagues Under the Sea, and the Mike Fink Keel Boats were all in operation before the end of the year. Tom Sawyer Island opened the next. “Disneyland will never be completed,” Walt said. “He practically lived there,” recalled Lilly.

Considering his commitment to Disneyland, it’s not surprising that Walt was unable to devote himself to the studio’s film output as he had in the past. Though quality was somewhat erratic — more than one less-than-wonderful film was released — the studio produced a series of successful films through the early 1960s. The animated features included “Lady and the Tramp,” “Sleeping Beauty,” “101 Dalmatians,” and “The Sword in the Stone.” Live-action films included “Johnny Tremain” (which featured Sharon in a bit part), “Old Yeller,” “Darby O’Gill and the Little People,” “Swiss Family Robinson,” and “Pollyanna.” Walt was always involved with casting, and for Pollyanna he hired 12-year-old Hayley Mills, a very talented young lady who went on to star in a number of Disney productions. “She would mess with her mouth and be very natural. Walt loved her,” reported artist Peter Ellenshaw.

In 1959, Walt came out with “The Shaggy Dog,” the first of a series of lighthearted comedies that did reliably well in the box office. Like “The Shaggy Dog,” “The Absent-Minded Professor” similarly relied upon impossible situations for much of its humor. Though Fred MacMurray was billed as the star of that film, it was actually the flying car that held audiences spellbound. As a result of the success of such films, by 1961, Walt’s company was debt free for the first time in some 20 years. He would have liked to expand his scope to a wider range of films, but his public wouldn’t have stood for it. In the 1960s, he saw the movie “To Kill a Mockingbird” and told Ron Miller he’d like to make a picture like it. But he knew that was impossible. “He was very frustrated,” recalled Miller. “Walt had created this image and he got locked in.”

Walt and Roy — who had always had their differences — had one of their most protracted battles in 1963 when Roy determined he had to deal with Walt’s own company — WED — which was beginning to put efforts into a new project in Florida. Roy felt, perhaps justifiably, that there was a potential conflict of interest between Walt’s personally owned company and the stockholder-owned Disney Company. Lawsuits could follow. Walt, he said, would have to sell portions of WED to the Disney Company. Writes Bob Thomas, author of biographies of both brothers, “For months they would not talk to each other, communicating through intermediaries and impersonal memos. Only their close associates were aware of the frost between them.” Finally, a compromise was reached. And Walt gave Roy a Native American peace pipe, writing, “It was wonderful to smoke the pipe of peace with you again — the clouds that rise are very beautiful.”