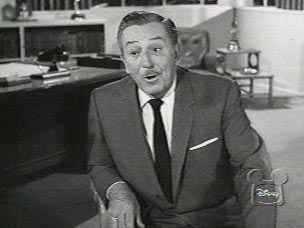 In 1964, Walt once again focused most of his attentions on a big-screen creation — “Mary Poppins.” Not a single element escaped his scrutiny. The result, of course, was unforgettable. Walt and Roy had been trying to get rights to the book, by P.L. Travers, for years, and were finally successful (though the relationship between Walt and Travers was somewhat rocky through the creation of the film). Walt brought in two of the best song-writers in the business, Richard and Robert Sherman, who shared his vision for the story. He particularly loved the song “Feed the Birds.” In fact, many evenings toward the end of the day, he’d call for the brothers to come to his office and “Play the song” for him. They knew which tune he meant. “Mary Poppins” premiered on August 27, 1964, to nearly universal critical acclaim. It received 13 Academy Award nominations

As Walt entered his mid-60s, he didn’t seem to be slowing down. In fact, he appeared to be speeding up. He decided to create four exhibits for the 1964 World’s Fair in New York. Why? So that he could experiment with new ideas — particularly Audio-Animatronics — while using other people’s money. The Mr. Lincoln attraction he developed for the State of Illinois was one of the hits of the fair, and allowed him to take Audio-Animatronics a giant step forward. His other exhibits — done for General Electric, Pepsi-Cola, and Ford — were also hits at the fair. Meanwhile, he was working on other plans for the future: a ski resort called Mineral King was to be built near the Sequoia National Park. He considered a tourist site that might be called Walt Disney’s Boyhood Home in Marceline, and even bought up properties there.

Neither Mineral King nor Walt’s Boyhood Home actually came into being. But his plans for a new kind of university were more successful. Declared Walt, “A completely new approach to training in the arts is needed. That’s the principal thing I hope to leave when I move on to greener pastures. If I can help provide a place to develop the talent of the future, I think I will have accomplished something.” He certainly did. Dubbed CalArts, an amalgamation of the Chouinard Art Institute and the Los Angeles Conservatory of Music, it would educate students in all facets of the arts — dance, music, drama, visual arts, and film. CalArts opened in 1961 and has been growing ever since. But though Walt was excited about all of these efforts, their scope paled in comparison to the so-called Florida Project — a gigantic effort set for an area twice the size of Manhattan Island in the middle of Florida

Of course the Florida Project would include a theme park like Disneyland, but that’s not really what fascinated Walt. No, he had decided that he could apply his lifetime of experiences to a brand-new kind of city; a city whose residents would utilize the best thinking about transportation, communication, and sanitation. “Solving the problems of the city obsessed him,” says John Hench, who began working for Walt in 1939 and is still with the company Walt left behind. Walt called his dream EPCOT, for Experimental Prototype Community of Tomorrow. He studied, planned, and sketched ideas for it. On the last trip the Disney family took all together — a memorable yacht ride through British Columbia waters — Walt relaxed by reading books about city planning. Although EPCOT exists today, it’s not the place Walt envisioned. He simply didn’t live long enough to see this dream to reality.