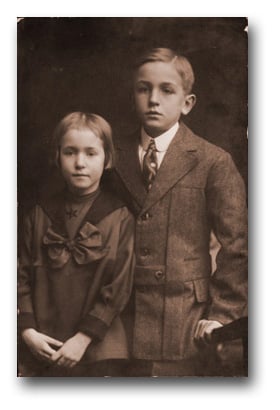 In 1908 Herbert and Raymond decided they had had enough of farming, and of their father’s insistence that they use any extra money they could earn to help support the family. Now 16 and 18 — grown men by the standards of the time — they departed for better times in Chicago. In the fall of 1909, Walt started at the brand-new Park School in Marceline. But he wasn’t to be there long. In the fall of 1910 Elias contracted typhoid and almost died. He recovered, slowly, but knew he couldn’t keep the farm afloat. So the farm was sold for $5,175, and the family moved to Kansas City in the summer of 1911. Paradise was lost.

In Kansas City, Eli In Kansas City, Elias bought a newspaper route. Walt and Roy were his staff, and he imbued in them a drive for perfectionism. Walt rose at 3:30 a.m. and was required to place every paper behind the customer’s storm door — not out on the lawn like other newsboys. In the winter, crawling up icy steps with heavy bags of papers more than once drove Walt to cold tears. As a result, Walt’s schooling was characterized by intermittently successful efforts to stay awake. Occasionally, though, he’d surprise his teachers. In fifth grade he memorized the Gettysburg Address, came to school dressed as Lincoln, and performed for every class in the school. He loved theatrics and studied Charlie Chaplin movies for tips on performing. He and a buddy, Walt Pfeiffer, worked up little skits to act out at amateur-night competitions. A talent for art also clearly emerged, and Walt drew his own versions of Maggie and Jiggs, a popular comic strip.

Elias has often been described as a ne’er-do-well who bounced from job to job. In fact, his newspaper route was very successful, and he began investing money in a jelly firm in Chicago, the O’Zell Company. O’Zell planned to produce a bottled carbonated beverage, and Elias was convinced that such drinks had a big future. So he sold the paper route, increased his investment in the factory to $16,000, and became head of the company’s plant construction and maintenance. This, of course, required moving to Chicago. Unfortunately, the executives in charge were less than honest, and O’Zell didn’t last very long. When Walt’s folks left for Chicago, he chose to stay behind for the summer. He lived in the family house with Roy and his oldest brother, Herbert, who by now was married and had a two-year-old daughter, Dorothy.n=”center”>Walt Returns to Chicago

Roy decided that it would be educational for Walt to have a summer job selling newspapers, candy, fruit, and soda on the Santa Fe Railroad. Walt loved the uniform, the trains, the candy, and the chance to see the country. He paid scant attention to the business end of the enterprise, however, and wound up losing money. Walt didn’t mind. He never did anything for the money. At summer’s end, he joined his family in Chicago, where he attended McKinley High School. But his mind was thousands of miles away, on the battlefields of Europe. Walt wanted to be part of the War to End All Wars. In the meantime, he attended the Chicago Institute of Art, worked at the O’Zell Company, and drew patriotic sketches for the school paper. When school let out for the summer, he began to work at the post office, where he narrowly escaped an untimely end when the building was bombed.