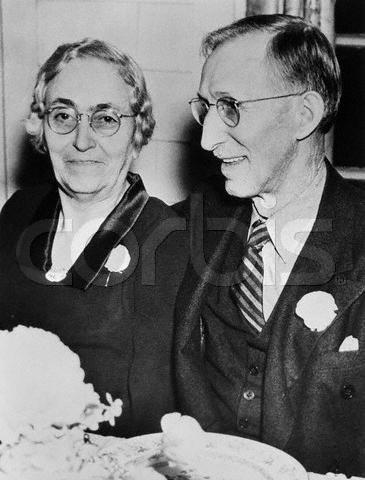 In 1937, Walt and Roy grew concerned about their parents who had been running a rooming house in Portland. Their health wasn’t great, and the boys could afford to buy them a house in California and hire a housekeeper to help take care of it. The gas heating in the house wasn’t properly installed. Flora had complained that the furnace wasn’t operating well, and Walt sent studio repairmen to fix it. But they didn’t succeed. So, on the morning of November 26, 1938, gas fumes spread through their home. When Elias woke up, he found his wife’s body on the bathroom floor. He passed out himself trying to carry her to another room. When their housekeeper began to feel dizzy she rushed to check on them, found them both unconscious, and got a neighbor to help her get them out of the house. It was too late for Flora. Elias survived, but never completely recovered. And though nobody knows precisely how he felt, it would appear that Walt never got over the tragedy either. Years later, he wouldn’t even talk to Sharon about it

When Walt decided to create the world’s first feature-length animated film — “Snow White” — virtually everyone thought he was headed down the wrong path. Roy and Lilly were unhappy. With Mickey Mouse and the Silly Symphonies doing well, the brothers had plenty of money. Why gamble? After all, a feature-length cartoon was estimated to cost at least half a million dollars (and, largely due to Walt’s perfectionism, it would ultimately cost about three times that). His wife and brother weren’t alone. Others in the entertainment business thought he was foolhardy too. They didn’t think Walt could come up with a story line that would hold people’s attention for over an hour of animation. They thought that such a cartoon would hurt audiences’ eyes. They called the venture Disney’s Folly. Of course, Walt listened to none of this.

In fact, Walt was a better businessman than many realized. He knew that movie houses were no longer showing as many cartoons as they once did (a casualty of increasingly common double features, which left less time for animated shorts). What’s more, Walt’s competitors were coming on strong with cartoons — like Popeye — that rivaled Mickey Mouse in popularity. “I knew if we wanted to get anywhere we’d have to go beyond the short subject,” he said. The selection of Snow White was carefully thought out. Walt: “I had the sympathetic dwarfs, you see? I had the heavy. I had the prince. And the girl. The romance. I thought it was a perfect story.” Staffers were convinced he was right after an evening in early 1934 when he acted out the entire story — all by himself. After several exhausting hours playing an evil queen, a sweet heroine, a handsome prince, and seven individual dwarfs, they were won over.

As “Snow White” proceeded, alongside a prodigious output of shorts, the studio expanded. In 1935 alone, 300 additional artists were added. Meanwhile, Walt was convinced that in order to really progress he needed to train his own staff; there was simply no place else for them to learn the skills he was demanding. So he held classes every night as well as for two half days each week. His artists became increasingly proficient at re-creating the real world in an animated feature. “I definitely feel that we cannot do the fantastic things based on the real until we can do the real,” he said. The Silly Symphony “The Old Mill” gave Walt’s animators the opportunity to experiment with a new invention, the multiplane camera, which gave them the ability to simulate depth. Another Silly Symphony, “The Goddess of Spring,” was utilized to help them with the extremely difficult task of animating the human form.

Scenes were added and cut, and when “Snow White” was close to completion, Walt decided she looked too pale. So inkers and painters added blush to her cheeks in tens of thousands of drawings. It was all worth it. The film opened on December 21, 1937, in the Carthay Circle Theater in Los Angeles. Charlie Chaplin, Cary Grant, Jack Benny, Shirley Temple, and George Burns were all there. As animator Ward Kimball recalled, “The highlight was at the climax of the film, when Snow White is presumed to be dead and she’s laid out on the slab … . Here was a cartoon, and here was the audience crying. The biggest stars, you name them, were all wiping their eyes.” As John Culhane, an animation authority and author of the soon-to-be released “Fantasia 2000: Visions of Hope,” has written, “In Disney’s ‘Snow White,’ for the first time, moving drawings became moving drawings.”