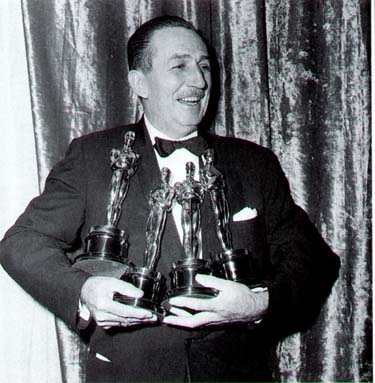 Of course “Cinderella” — though it would prove to be a wildly profitable animated feature — was just an extension of work Walt had done before World War II. True-Life Adventures, however, was something entirely different. When Walt sent a husband-and-wife team of filmmakers to Alaska to take movies, staffers were baffled. And when they saw the endless footage of seals that seemed to so enchant Walt, they were further mystified. “You never saw anything so dull in all your life,” said one. But where others saw miles of boring seals, Walt saw gold. He added music, clever writing, some jokes, and solid editing, and next thing, the water-loving creatures were the stars of “Seal Island,” Walt’s first True-Life Adventure. Though his distributor, RKO, balked at the idea, they were ultimately convinced. In time, Walt would make 13 True-Life Adventures between 1948 and 1960; eight would win Academy Awards.

“Actors are great,” Walt once teased his animators. “You give ’em the lines, they rehearse a couple of times, and you’ve got it on film — it’s finished. You guys take six months to draw a scene.” No doubt, Walt was attracted to live-action films from the beginning. Though his distributor tried to discourage the shift — why try to turn a successful cartoon-maker into just another producer? — they were unsuccessful. And Walt proved himself adept in this new field. His first effort, “Treasure Island” — which was filmed in England and permitted Walt and his family to take a memorable trip there — showed that the same skills that made him a virtuoso of the animated character applied to stars that breathed air. His amazing story sense, attention to detail, and willingness to pursue perfection were keys to success in this field too.

Walt had loved trains all his life. And in 1947, he wrote his sister Ruth that “I bought myself a birthday/Christmas present, something I’ve wanted all my life — an electric train . . . you probably can’t understand how much I wanted one when I was a kid, but I’ve got one now.” For some time, Walt had enjoyed polo as a hobby, and had even dragged Roy and a number of friends from the studio into it. However, an injury kept him from competitions on horseback, and so he threw all his extra energies into his trains. He loved making tiny miniatures as well. Some of them would be used in his train sets. “He’d come up to the dinner table,” recalled Diane, and “bring this little piece of wood he had [been working on] and sit there all through dinner and be so proud of it.”

In 1949, Walt and Lilly decided to build a new house. They didn’t want a typical Hollywood mansion, preferring one that would be easy to maintain. Not that it was an ordinary house. It featured a projection room, for example, and “a playroom with a soda fountain,” Walt wrote, “where the girls can entertain their friends without disturbing the rest of the household.” Walt loved his soda fountain, too, and Sharon recalled, “He’d go out there and make these weird concoctions that nobody would eat, including himself.” Most notably, though, the house featured a half-mile circle of one-eighth-size train tracks, on which Walt would ride his own miniature train engine. “Walt was not so much interested in a new house as he was in the property, so that he could build his train on it,” said Lilly. A 120-foot-long, S-shaped tunnel was included, under Lilly’s garden.

“The voyage that ended with the opening of Disneyland in 1955 really began when Walt was entertaining his little girls on Sundays in the early 1940s,” reports the Disney biography “The Man Behind the Magic.” “As the children took their fifteenth ride around the merry-go-round, Walt would sit quietly on a wooden bench, wondering why no one had invented a clean safe place where parents and children could enjoy themselves at the same time.” Walt played with a sequence of ideas that grew steadily bigger. Just before World War II, he considered a small amusement park across the street from the studio that would feature pony rides, a train, and statues of his popular characters. Later, he considered a traveling show featuring a series of scenes of old-time America” He wanted [the show] to go to the people,” recalled studio artist Harper Goff. But eventually Walt determined that that was impractical

Walt visited amusement parks around the United States and the world. Mostly, he found them to be awful, smelly, dirty, and not particularly safe. He was particularly taken by the Tivoli Gardens in Copenhagen, which was fairly priced and clean as could be. Of course, he continued working in the studio on feature-length cartoons like “Alice in Wonderland” and “Peter Pan”; more True-Life Adventures; and live-action films, notably “20,000 Leagues Under the Sea,” his most ambitious film project to date. Money was no object here; when the squid sequence seemed unrealistic, Walt just ordered it reshot — for $250,000. But the idea of his amusement park consumed him. The company had, by this time, sold stock to the public, and Roy was concerned that shareholders would be furious if he put the company’s resources in such a risky new venture.

But the lack of ready money had never stopped Walt before. He borrowed on his life insurance, sold his vacation home in Palm Springs, borrowed money from employees, and founded Walt Disney, Incorporated (which later became WED Enterprises, for Walter Elias Disney), to do the work. That still left him short on cash. No problem. He and Roy struck a deal to create a television show for ABC. In exchange, ABC would put up $500,000 in cash, guarantee $4.5 million in loans, and receive one-third ownership in the park (which it later sold back to Walt). The show, “Disneyland,” would make Walt’s face as famous as his name; his lead-ins provided an opportunity for him to talk directly to his audience in a tone that was natural and familiar and made him a favorite guest in millions of homes. For three years it was the only ABC show in the top 15 rated programs.

“Disneyland” led to the “Mickey Mouse Club” and “Zorro.” The “Mouse Club,” of course, was a phenomenon in its own right. And it owed a great deal of its success to Walt’s insistence that children could be entertained without being condescended to. Soon, television wasn’t just a means for funding Disneyland; it was an important part of Walt’s empire as well. Meanwhile, on the homefront, Diane had fallen in love with a handsome young man named Ron Miller. Walt described him in a letter to his brother Herb as “a wonderful boy, a big athlete whom we all love.” Diane and Ron got married in a tiny church in Santa Barbara, California. Ron played professional football for a while and then went to work for Walt. “I have a great ambition for him,” Walt told friend Herb Ryman, “He will run the studio one day.”