History Of Winnie The Pooh 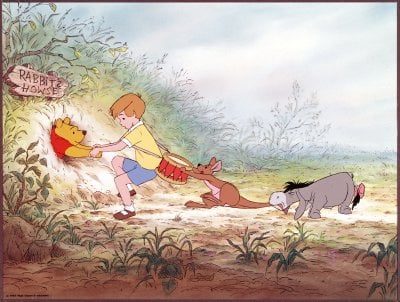 The person responsible for the beginning of Poohs life is Harry Colebourn. This gentleman was a soldier in the Canadian Army during World War I in 1914.

On being transported to France for an assignment, the train made a stop in Ontario.

In order to pass time, Colebourn decided to get off of the train for a while and take a look around. As it happened, he purchased a small female black bear cub from a local hunter for twenty dollars. The regiment he belonged to fell in love with this small ball of fur. The bear became a part of this regiment and eventually became their mascot. Colebourn also came up with the name ‘Winnie,’ which was derived from his hometown of Winnipeg.

Unfortunately, Colebourn received an assignment and had to find a safe haven for Winnie. He made a trip to the London Zoo and asked them to take care of Winnie temporarily while he was gone. Colebourn felt the Zoo would be a perfect place to leave Winnie for two or three weeks. They, of course, with enthusiasm, agreed. Unexpectedly, the weeks turned to months and the months turned into years. But, at the Zoo, Winnie became the star attraction, and children absolutely loved her. When Harry Colebourn returned in 1918 to retrieve his bear, he noticed how comfortable Winnie had been living. He made a decision to leave Winnie with the London Zoo because of the happiness she gave to the visitors especially the children. Winnie remained at the London Zoo for fifteen years.

Christopher Robin was born in 1920, the son of Alan Alexander Milne, the English author, and played a more important role in the history of Pooh. Christopher Robin was only five years old when his parents decided to take him
to the Zoo. Christopher loved bears; he had a stuffed bear that he called Edward that he received as a birthday present on his first birthday.

He immediately fell in love with Winnie. The more trips that Christopher made to the London Zoo, the closer he became to Winnie. The name Pooh was given to Winnie by Christopher.

Christopher became such good friends with Winnie that his family took regular outings to the Zoo. The amazing thing about this relationship was that this little boy would spend time in Poohs cage! As time went by, the two became inseparable.

Poohsticks is a game first mentioned as being played by Winnie-the-Pooh and friends in the book The House at Pooh Corner by A. A. Milne, as well as in the animated featurette Winnie the Pooh and a Day for Eeyore. It is an extremely simple game, played on a bridge over a river. Each participant drops a stick on the upstream side of the bridge; the player whose stick first appears on the other side is the winner.

The Poohsticks Bridge is a bridge located in Ashdown Forest, close to the village of Hartfield, East Sussex, England. This is considered to be the bridge on which A. A. Milne and his son Christopher Robin first played the game

Though Charles Scribner, The New York Evening Post, and St. Nicholas Magazine published Milnes stories with illustrations by several of the more famous American artists of the 1920s, Milnes original
version is better known to have been illustrated by E.H. Shepard. Though Shepard decorated the books published by Methuen and E.P. Dutton 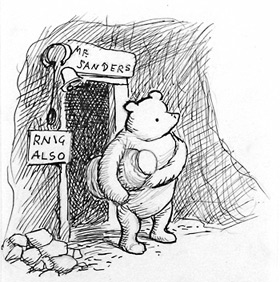 In 1926, the childrens Pooh storybooks was created. Eventually, Milne sold the rights to the storybooks to Walt Disney. Walt Disney brought Pooh to film in 1966 due to his daughters falling in love with Poohs storybooks. Some of us may not remember, but in 1977 the first animated Pooh film was released. It was titled, The Many Adventures of
Winnie the Pooh.
Unfortunately on May 12, 1934, Pooh passed away and the London Zoo was never the same.

There is a life-size sculpture at the London Zoo of Winnie the Pooh in memory of the friendship of a little boy and a large black Canadian bear. The sculpture was done in bronze by Lorne McKean. Christopher Milne unveiled this sculpture in 1981 to commemorate the friendship that became a part of history. 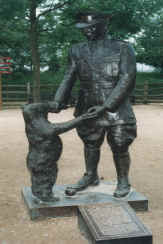 At E.P. Duttons office in New York the original Pooh bear has been preserved by Elliott Graham. Mr. Graham has been the guardian for more than forty years. Christopher Robins stuffed animals are kept behind glass on a cabinet located in the New York Public Library.

Pooh continues to dominate storybooks and films. They continue to show how the precious and loveable bear bluffs his way through life. This way of life can be associated with many of our own lives today. People sometimes consider how brave and pure Pooh is and adopt his philosophy towards life.

The stories written by A.A. Milne were not just meant for children. They were written to bring out the child within all of us. The Pooh books have been translated to include almost all languages around the world. Pooh Bear has become second to Mickey Mouse which makes them the two most loved characters.

Poohs character continued in 1997 as Disney released Poohs Grand Adventure. Pooh also was part of another current Disney release called The Tigger Movie in February 2000. What an adventure Pooh has had. He went from being a figure in bedtime stories to storybooks to films. The bedtime stories that A.A. Milne told to Christopher Robin are now being read to girls and boys everywhere.

So, Pooh continues to be the favorite of children and adults around the world. He will always be a sweet, furry and
cuddly bear that children adore. Remember how Pooh received his name and that this Canadian bear, purchased by Harry Colebourn, has put a childlike smile on all of our faces. For children all over the world, Pooh has become a part of
their childhood.